Wow, I cannot believe the weekend I just had.
It was absolutely incredible!
Ireland is a beautiful country full of history and culture.
I fell in love the first day.
First off, those accents.
Nothing, I mean nothing beats an Irish accent.
When they would speak I would just stare.
Now let's get down to talking about the trip.

We arrived on Thursday night to our hostel.
Now to the grownups freaking out because I stayed in a hostel, it was okay.
We were in a hostel that was ranked 4.5/5.
This is basically the best you can get.
It was super clean and had an amazing staff.
Plus they served probably the best cheeseburger I have ever had.
Seriously I'm still thinking about it.
So we had checked in and then went to bed.

Friday morning was a 3 hour walking tour of London.
It turns out it rains in Ireland, a lot.
It was sprinkling when we left the hostel and just got worse.
It was windy, freezing, and raining.
You couldn't even use an umbrella because of the rain.
When we met up with our tour guide she informed us that it was the worst storm they have had in 16 years.
Brilliant!
3 hours of walking in the worst storm in Dublin.
COOL!
I'm sad to say because of the weather I really didn't get a lot of pictures from the day.
Honestly I didn't even see it myself because I had my head down to shield it from the rain.
After we were all thoroughly soaked and freezing we stopped for lunch in a pub called O'Neills.
This place was incredible.
It's an old traditional pub and it was beautiful inside, not to mention WARM!
I ordered a traditional Irish stew.
Some of you know I'm not the biggest fan of stew.
It's just the texture of cooked veggies sicks me out.
Let me go on record and say this was the best stew I have ever had!
It was incredible.
The meat was so tender that it just fell off.
I could probably eat it for the rest of my life and be content. 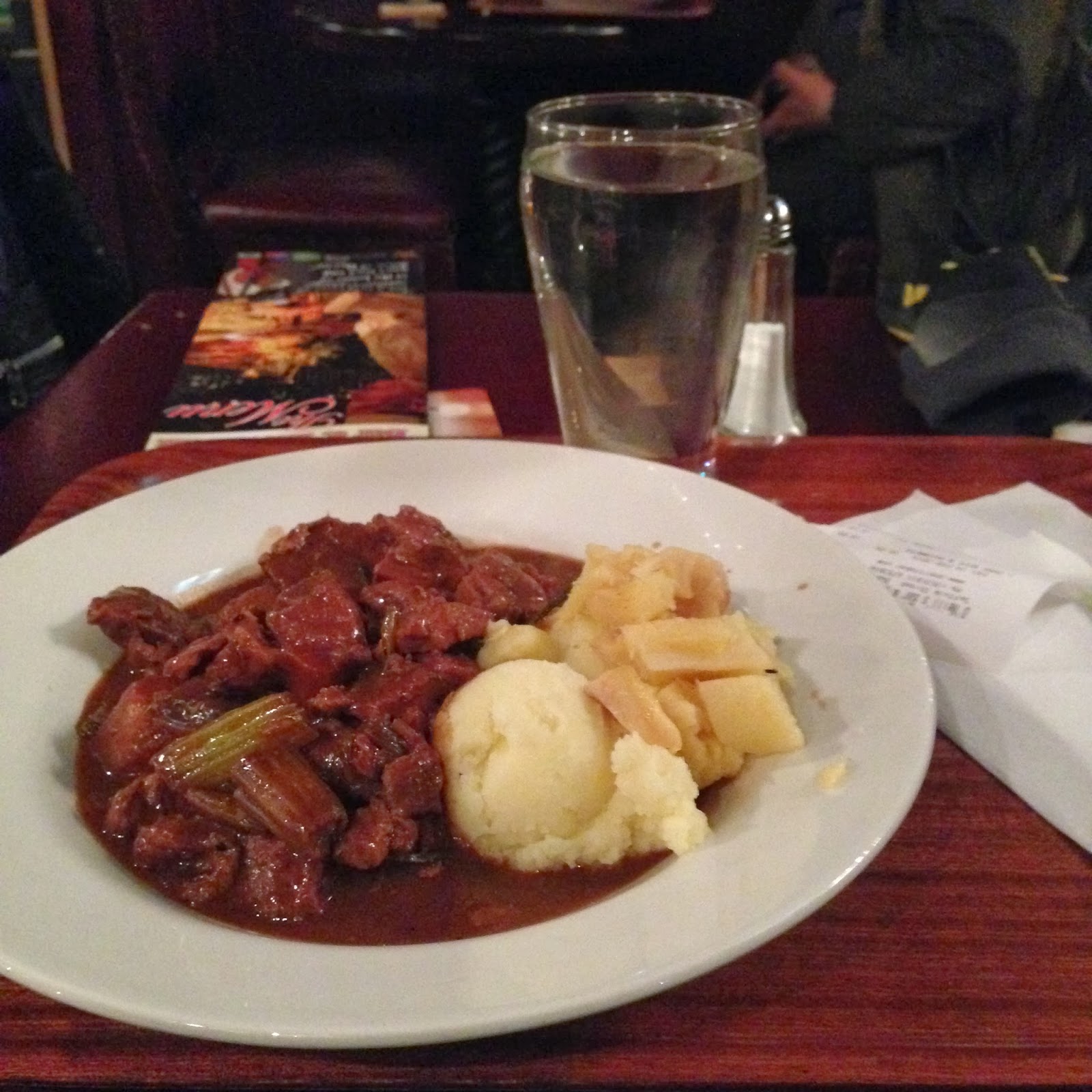 Tell me that doesn't look amazing and mouthwatering.
After lunch we headed to our tour of the Guinness factory.
This was really cool and our guide's accent was incredible of course.
We got to see how Guinness is made and learned why it's "black" beer.
Fun fact: It's not really black, it's red.
Another fact: I tasted it and hated it. Go figure.
At the end of the tour our guide taught us some Gaelic, which brings me to the title of this post.
Sláinte means 'cheers' in Gaelic. It is pronounced slawncha.
It is also my new favorite word.
Friends at home be prepared for me to say it ALL the time.
After the Guinness tour it was off to the hostel to get ready for the pub crawl that night.

This pub crawl consisted of 5 pubs and there were probably 40 of us.
There was our huge group of American students and then these rando people.
A huge group of German guys joined us at the first bar.
They were an interesting bunch to meet.
I love the pubs over here.
They all have an awesome atmosphere and live bands.
The first live band we saw was incredible.
Their name was Mick Heslin and I fell in love.
I'm sure you all saw my pictures of them on Facebook.
They were also wicked talented.
The next bar was a place called the Porter House that brews their own beer.
They had this kind called Fruilini and it's a Strawberry beer.
It was so yummy.
Then the last bar was actually O'Neills where we had ate lunch.
The atmosphere was completely different.
It was packed full and they also had a live band.
This band was somewhat older and playing more traditional stuff.
We got to learn an Irish clapping song that we all loved.
We couldn't actually understand a word being said though.
Then it was off to bed because we had an early start the next morning.

Today was the day for the Cliffs of Moher and Galway.
We were praying for good weather and had been told we should get some.
When we left the hostel it was raining and gloomy.
Luckily the Cliffs of Moher are 2 hours outside of Dublin.
I slept the entire way so it wasn't bad except I'm pretty sure our bus driver loves his break pedal way too much.
When we arrived it was sunny and gorgeous.
I was thanking God for such beautiful weather.
The Cliffs of Moher were breathtaking.
I can't even put in words how perfect it was.
I could seriously go there everyday and never get sick of it.
Fun fact: The Cliffs are in Harry Potter: The Half Blood Prince.
When Harry and Dumbledore are standing outside the cave where the horcrux is and the water is splashing all around them.
Just another reason I love them.
Honestly, I am so thankful that I got to see them and have such beautiful weather to do it in.
I did so some rule breaking and jump the fence to take a picture with the cliffs.
I was afraid of falling the entire time.
You can go to my Facebook album for the blog and see all my pictures.
After the Cliffs it was another 2 hour drive to Galway.
Galway is a cultural center and a lot of residents still speak Gaelic.
I must say I wasn't too impressed with Galway.
We were in the touristy shopping streets and didn't really get to see the actual city.
I was a little disappointed but I had an amazing pub lunch at a place called The King's Head.
After we left Galway we came back to Dublin and just explored the night and ended up at pubs listening to music the entire night.
This is my new favorite thing about going out.
Especially when they play American songs!

Sunday was free time.
We were done with our tour group and could go on our own.
I had a traditional Irish breakfast without the baked beans.
I don't get why these people think baked beans are a breakfast food but I can't do it.
After that we went to find St. Patrick's Cathedral.
We found it and it was gorgeous!
The park behind it was green and so peaceful.
We tried to catch a stray dog but it ran away from us. 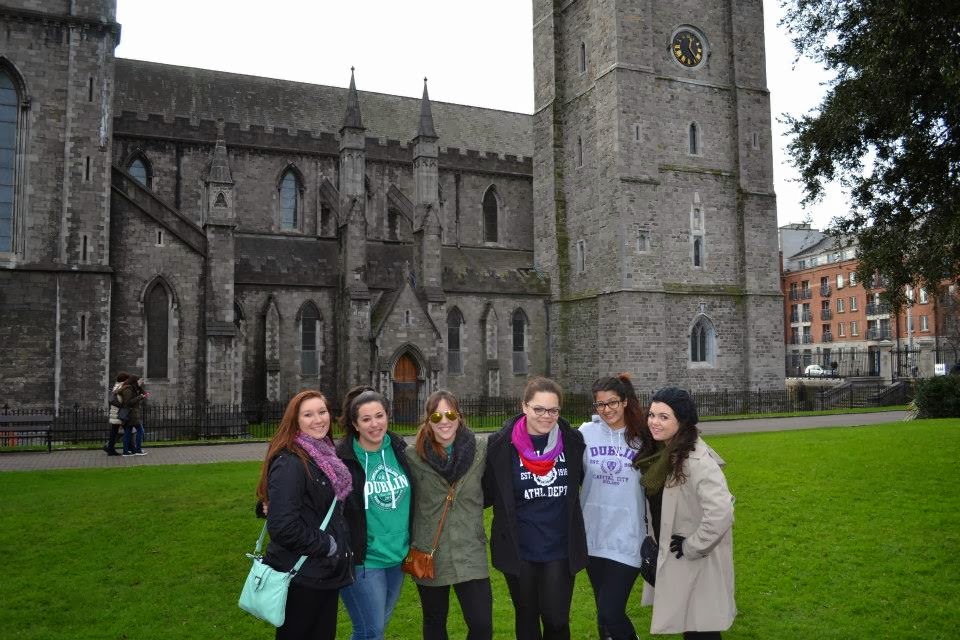 So I want to introduce you all to my friends over here.
These are my American friends, excluding Sean(Sleepy Hollow) who is taking the picture.
From left to right: Me, Deanna(Brooklyn), Erika(Connecticut), Taylor(Kentucky), Natasha(Chicago), and Tori(Long Island).
Taylor, Natasha, and Tori are my flatmates and the other three live across the hall.
I am so happy to have these people over here.
We do pretty much everything together.
I just wanted you all to see my friends and know who they were since I will be talking about them a lot.

All in all I had an amazing weekend and can't wait to go back to Ireland.
It was beautiful and I could definitely live there.
Plus they have cows!
COWS people!
That right there already pushes them for a win!
I'm so thankful that I got to experience everything on this trip and had an amazing time.
Make sure to check out the Facebook album for my blog to see more pictures.

Until next time,
xoxoxo