So you should think of this post as a sequel to my last post.
Honestly, I'm just trying to stay up so I can beat off jet lag.

So I arrived and met my group.
Then we took a charter to our dorms.
While we were on the charter we got a mini tour of a few of the boroughs of London.
Let me just say this so everyone understands.
LONDON IS PERFECT!
It is so incredibly beautiful!
I cannot even believe that I am actually here.
It is so different from anything I have ever seen.
Fellow classmates, we thought NYC was big and incredible. It has nothing on London.

We checked into our dorms and got all our stuff in our rooms.
We had about 30 minutes of downtime.
I used this to lay on my bed and change.
It went by extremely quickly.
Then it was off to meet Susannah (my onsite director) in front of the LSBU Student Centre.
We finally get everyone there and equipped with their oyster cards.
These are cards for the tube and buses. We hopped onto the tube and we were off!

The first stop was shopping. Most of us needed bedding or towels.
I needed towels and pillows because I had bought bedding from a girl here last semester.
We went to BHSmith which is like a Macy's.
It was so weird using British pounds to pay for my items.
Another weird yet cool thing is no taxes.
When an item is 25 pounds you pay just that. Makes learning the currency much easier.
After we were all done shopping it was off to the pub for some grub.

I must add that this entire day was chaos. We kept losing people, oyster cards, and having mishaps. I am amazed by Susannah and her ambition to keep going.
At this point we are all feeling the jet lag hit us, but we are starving.
We end up on London Bridge on the way to the pub. This is the view of the Tower bridge and the Thames river from this spot. Isn't it gorgeous? 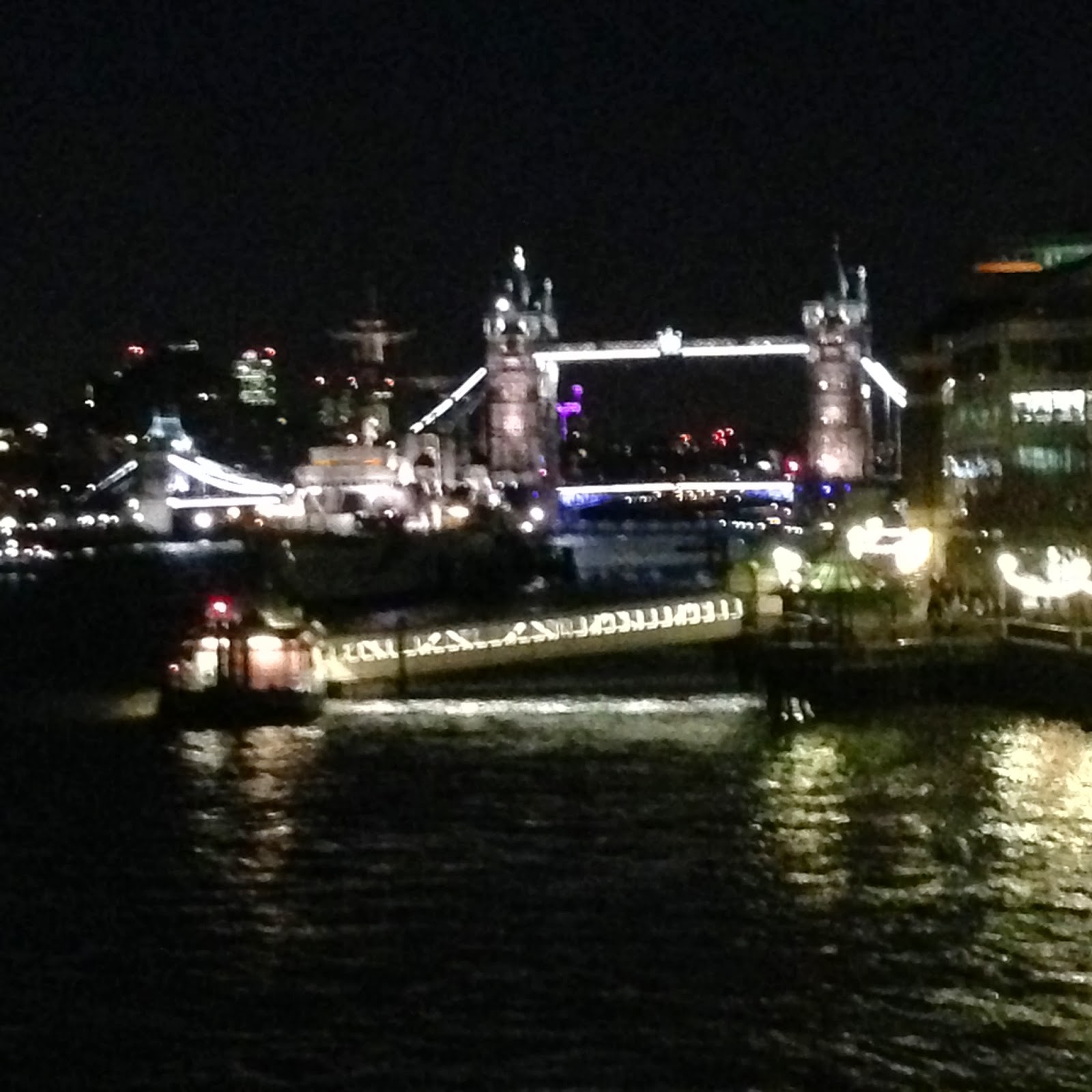 NOW it was time for some pub grub!
I was so excited to experience my first pub.
It was called the George Inn.
I wish I could have gotten a picture of the place it was amazing.
It was small and quaint and exactly how you would picture a pub in London.
I ordered a very traditional dish of fish and chips!
It was delicious.
Of course before digging in I had to be the typical tourist and take a picture. 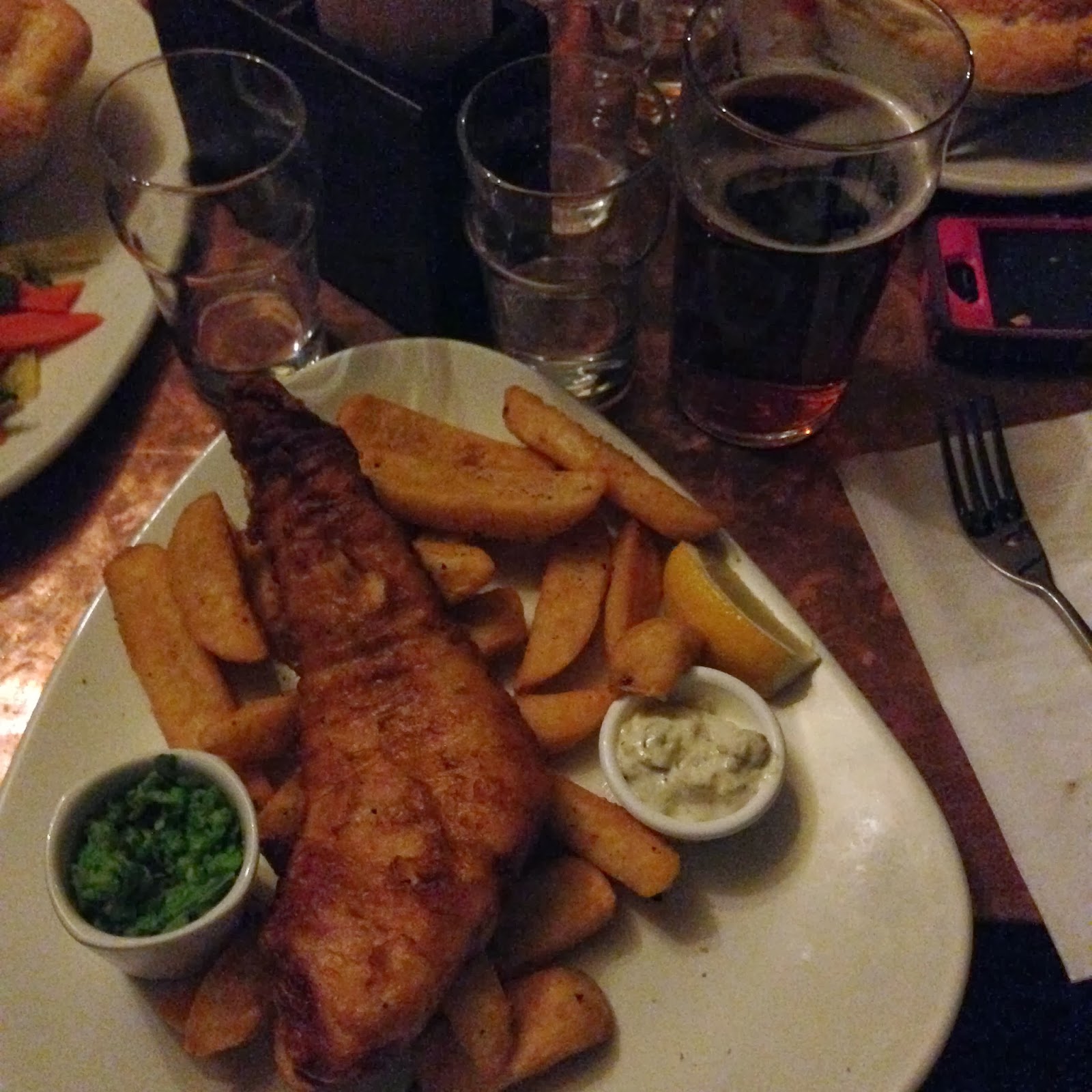 After eating we were all exhausted, but my day was not over.
Since I had bought things from a previous student, she had to give those things to Susannah.
So myself and another student had to go to Susannah's house to get our items.
It was important because I needed the bedding I bought for the night.
The walk to Susannah's was so cool!
We rode the tube (I think I'm already a pro!)
Then walked the rest of the way.
She lives in a house on a street built in 1792! How cool is that?
It was really a pretty and peaceful walk, except my feet hurt and I wanted to curl up and sleep.
Being the gem that Susannah is she brought us in her house and introduced us to her family.
Her husband was really kind and she has the cutest 3 year old twin girls.
When they would speak I would just smile. British accents are cool, but British accents on a 3 year old is so much better.
Then it was finally time to make it back to the dorm for the night.
I am so incredibly thankful to finally relax. It has been a long and stressful two days!
Tomorrow is a walking tour of London and I can't wait to tell you guys about it!